Toshiba: Product data for all channels

Toshiba Europe GmbH Neuss is a company of the global Toshiba Corporation, headquartered in Tokyo, that can look back on a corporate history of more than 130 years. Today, with 161,000 employees and a turnover of about $ 53 billion, Toshiba is among the largest IT and electronics companies worldwide. In the fiscal year 2007/08, the sales volume of Toshiba Europe GmbH amounted to € 2.5 billion. Toshiba Europe GmbH, seated in Neuss, acts as the European center for products in the fields of computer systems, projectors, storage media, and consumer electronics.

Why Alterra PIM for Toshiba?

Toshiba Europe GmbH is responsible for the provision of product data for all European subsidiaries of Toshiba Inc. After a product data management system that had grown for years reached the limits of its performance, and an integration of Eastern European sales partners proved impossible due to lack of Unicode support, they decided to integrate a reliable and modern SOA technology-based standard PIM system that should be able to handle the complex requirements in Toshiba's product data management. In a comprehensive 4-stage software selection process, Sepia PIM was ultimately chosen from a field over 15 competitors. 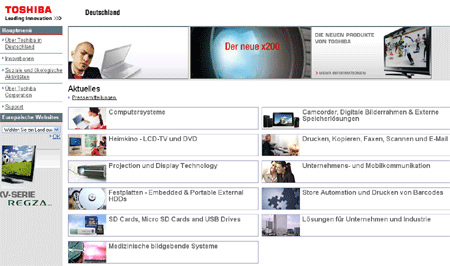 In addition to the configuration of Sepia PIM System for group-wide usage, the migration of data and permissions from existing systems played an important role.  In a complex project setting, the Sepia team successfully extracted data from existing systems and eventually managed the transition to the new system. During the project, it was also important to exclude negative "side effects" for the users.

John Accorinti, Project Manager PIM at Toshiba:  "Our users virtually sighed with relief when they could finally use the the brand new GUI of Sepia PIM Software.  Compared to the replaced system we had immediate time savings of 30% on the user side – only for data maintenance."

One of the main criteria supporting the use of Sepia PIM in a corporate environment is its sophisticated user authorization concept. In Sepia PIM, permissions can be assigned based on media (product catalogs), countries, and product characteristics. In combination with the option of combining permissions in groups and roles, almost any conceivable authorization scenario can be realized.

In addition to the strengths in product configuration and permission assignment, configuring translation workflows plays a major role for Toshiba. Product components are entered in English and then translated into more than 35 languages. This process is partly inbound and partly outbound via translation agencies that are connected to the system.

Data maintained in Sepia PIM can be distributed via the existing XML Export/Import, SOAP API, Text Import/Export, and ODBC interfaces. The transition to an SOA-based system landscape is thus no longer an issue for the company. Also the immediate interaction of PIM and groupware systems or existing Oracle database servers is guaranteed.

One of the key features of enterprise software structures are the many decentralized web content management and eCommerce systems that a PIM system needs to support immediately.  In the environment of a corporation like Toshiba, these include all product websites of the EMEA region and the Eastern European countries. Product data is partly output on central portal pages, and to another part also on the sites of large distributors. Sepia PIM is now serving all these output channels as a central and redundancy-free management system.

Last but not least, "post-surgical care" is an important criterion for enterprise customers such as Toshiba. A PIM system for about 40 sales regions requires an excellent technical support with very short response times. With Sepia GmbH & Co. KG and their service partners, system operation with an uptime of close to 100% is guaranteed.