Alterra Translation Memory is a web-based module for Alterra PIM that allows multiple translators to work on a translation job via the Internet. Alterra PIM software (Product Information Management) is commonly used in international corporations. Details of the system: 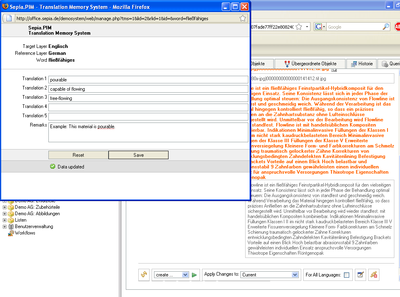 Figure:  Proposals for Translations in Alterra

Alterra Translation Memory as an add-on for Alterra PIM

And this is what the process looks like with the use of Sepia Alterra:

For further translations, the translator or his colleagues can access and use the stored translation suggestions (see point 5).

The purpose of this approach is to save time that would be lost while looking up terminology in dictionaries or other resources – and not to forget: to improve the consistency of translations as the process avoids that the same terms are translated differently within a coherent text or body of texts.

Integration of Google Translate or other Translation Services

The Alterra Translation Memory module can be simply extended by an automatic web translation service. This service can offer translation proposals for translators which can correct the proposals of these services and finally save the correct version of the translation.

This is a translation test box for the english version.